The MPs’ expenses scandal invigorated freedom of information in the UK. For one wood-carver in particular, it appears also to have moved him to furniture-making excellence. On 28 September the Antiques Roadshow, on an outing to Kirby Hall in Northamptonshire, featured the unnamed craftsman and his creation – a chair engraved with the words “The Freedom of Information Act” and with carvings of Gordon Brown, David Cameron, Nick Clegg, The Daily Telegraph…and a duckhouse. 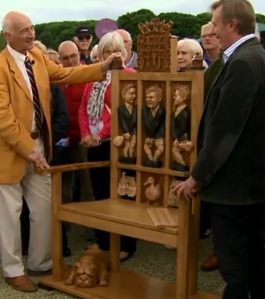 As expert Paul Atterbury suggested, perhaps its most appropriate home would be somewhere in the Palace of Westminster, to serve as a perpetual reminder to MPs.

Filed under Freedom of Information