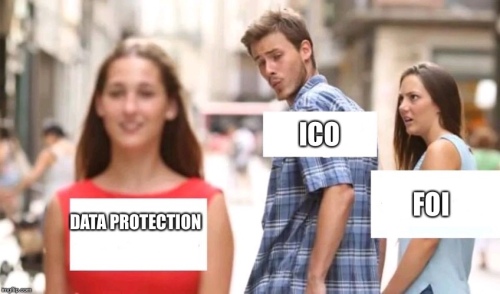 Slightly more than twenty working days ago I made a request to a government department under the Freedom of Information Act 2000. Following the structure of section 1(1) of the same, I asked

Please confirm whether you hold [X information] regarding [Y]

If you hold this information, please disclose it.

There are relatively mundane reasons why I am keen to know the first point, and, following on from that, to have the information if it exists.

On the twentieth working day (give or take a bank holiday or two) I received a reply to the first point, but total silence on the second:

I can confirm that [government department] does hold [X information] regarding the [Y].

Although this is rather a bizarre approach to an FOI request (FOIA is after all, primarily about access to information, not just knowledge that it exists) I have no reason to think that the failure to note the second point of my very short request was anything other than an innocent mistake.

Accordingly, I pointed the mistake out to the government department, asking them to send the information by return. (I had to do this by email, because no phone number is given on the correspondence or on the relevant (sparse) website (query whether the service is accessible, therefore, to people who may have difficulties in communicating in writing.)) However, not only did I not get the information by return, I got a template reply, and a new reference number, indicating that my follow-up email is being treated as a wholly new request. I would not be surprised for it to take another twenty working days to get a substantive reply (if I’m wrong, I will update this post accordingly).

So what to do? Well, I could complain to the government department, or ask for an internal review, but that would likely take at least another twenty working days to get a response. I could complain to the Information Commissioner’s Office, but, anecdotally, I understand they are taking some months to allocate and deal with complaint, and the only likely outcome would be a declaration that the government department had failed to comply with its section 10 and section 17 FOIA obligations, and giving them another period of days to comply. I can’t make an application for judicial review because a) the idea is completely ridiculous (have you seen my bank balance?) and b) in March the High Court rather peremptorily dismissed an argument that JR should be available for FOIA cases of urgency (on the grounds that the right of appeal under the statutory scheme was sufficient.

And FOIA delays are not isolated incidents; the BBC’s Martin Rosenbaum has written recently, following up his and others’ research, about the apparent contempt with which some public authorities treat FOIA and the Information Commissioner. Yet the latter appears unwilling, despite having the powers to do so, to act. As the Campaign for Freedom of Information recently noted, her recent draft regulatory action policy effectively ignored the fact that she is responsible for FOIA regulation, as well as for data protection and eprivacy.

Data protection and privacy are certainly hot topics (try counting the number of arriviste consultants who’ve sprung up over the last year to get an idea of how hot) but freedom of information laws are a legislative expression of another fundamental human right. I don’t think it’s the case that as a society we just don’t care about FOI (look back to the MPs’ expenses scandal to see how important and high-profile it can be) so why is it that there appears to be no effective mechanism to enforce our rights in a timely way against a recalcitrant public authority?

The views in this post (and indeed all posts on this blog) are my personal ones, and do not represent the views of any organisation I am involved with.